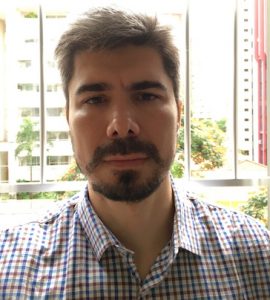 Título: Hypothesis management in support of the e-scientific method

Ten years have passed since Jim Gray and others first acknowledged the advent of a `transformed scientific method.’ Nonetheless, while research on eScience is still majorly associated with hardware and software infrastructure for data-driven science, including tracking the provenance of how scientists run their computational experiments, the epistemological aspects of such e-scientific method are still barely explored. In this talk I will focus on a specific problem in that landscape, which is data management support for experiments whose purpose is to assess rival hypotheses, the so-called `crucial experiments.’ Along those lines, I will show results on the automatic synthesis of a (U-relational) probabilistic database out of rival sets of mathematical equations and their related datasets stored in files.

Bernardo Gonçalves is a research staff member at IBM Research (Brazil’s lab) since early 2016. Before that he’s spent one year at the University of Michigan in Ann Arbor as a postdoc researcher, working with Prof. H. V. Jagadish (ACM Fellow, h-index 69). He earned his Ph.D. in Computational Modeling from the National Laboratory for Scientific Computing (LNCC) in Brazil with the thesis ‘Managing large-scale scientific hypotheses as uncertain and probabilistic data,’ for which he received an IBM Ph.D. Fellowship and LNCC’s nomination for the CAPES nationwide 2016 `best Ph.D. thesis’ award. He also holds a M.Sc. and B.Sc. in Computer Science from UFES. His research is concerned with database design, data analysis, uncertain and probabilistic reasoning, and other AI techniques to support hypothesis management at scale.